Simple Recipes There is a simple recipe for making rice. My father taught it to me when I was a child.

Back then, I used to sit up on the kitchen counter watching him, how he sifted the grains in his hands, sure and quick, removing pieces of dirt or sand, tiny imperfections. He swirled his hands through the water and it turned cloudy. When he scrubbed the grains clean, the sound was as big as a field of insects. Over and over, my father rinsed the rice, drained the water, then filled the pot again.

The instructions are simple. Once the washing is done, you measure the water this way – by resting the tip of your index finger on the surface of the rice. The water should reach the bend of your first knuckle. 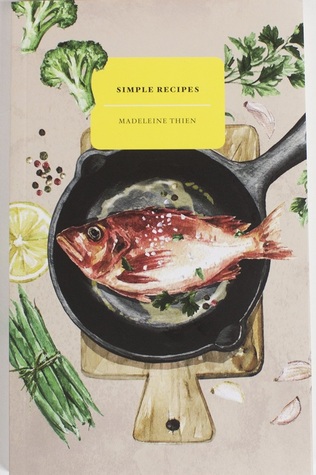 My father did not need instructions or measuring cups. He closed his eyes and felt for the waterline. Sometimes I still dream my father, his bare feet flat against the floor, standing in the middle of the kitchen.

He wears old buttoned shirts and faded sweatpants drawn at the waist. Surrounded by the gloss of the kitchen counters, the sharp angles of the madeleiine, the fridge, the shiny sink, he looks out of place. This memory of him is so strong, sometimes it stuns me, the detail with which I can see it. Every night before dinner, my father would perform this ritual – rinsing and draining, then setting the pot in the cooker.

When I was older, he passed this task on to me but I never did it with the same care. I went through rwcipes motions, splashing the water around, jabbing my finger down to measure the water level. Some nights the rice was a mushy gruel. I worried that I could not do so simple a task right. In answer, my father would keep eating, pushing the rice recopes his mouth as if he never expected anything different, as if he noticed no difference between what he did so well and I so poorly.

He would eat every last mouthful, his chopsticks walking quickly across the plate. Then he would rise, whistling, and clear the table, every motion so clean and sure, I would be convinced by him that all was well in the world.

My father is standing in the middle of the kitchen. In his right hand he holds a plastic bag filled with water. Caught inside the bag is a live fish. The fish is barely breathing, though its mouth opens and closes. I reach up and touch it through the plastic bag, trailing my fingers along the gills, the soft, muscled body, pushing my finger overtop the eyeball. The fish looks straight at me, flopping sluggishly from side to side. My father fills the kitchen sink.

In one swift motion he overturns the bag and the fish comes sailing out with the water. It curls and jumps. We watch it closely, me on my tiptoes, chin propped up on the counter. The fish is the length of my arm from wrist to elbow. It floats in place, brushing up against the sides of the sink. I keep watch over the fish while my father begins the preparations for dinner. The fish folds its body, trying to turn or swim, the water nudging overtop.

Though I ripple tiny circles around it with my fingers, the fish stays still, bobbing side to side in the cold water. For many hours at a time, it was just the two of us. While my mother worked and my older brother played outside, my father and I sat on the couch, flipping channels. He loved cooking shows. We watched Wok with Yan, my father passing judgement on Yan’s methods. I was enthralled when Yan transformed orange peels into swans.

Still, my father made careful notes when Yan demonstrated Peking Duck. He chuckled heartily at Yan’s punning. In the mornings, my father took me to school. At three o’clock, when we came home again, I would rattle off everything I learned that day. Let me see your forehead. I walked proudly, stretching my legs to match his steps. I was overjoyed when my feet kept time with his, right, then left, then right, and we walked like a single unit.

My father was the man of tricks, who sat for an hour mining a watermelon with a circular spoon, who carved the rind into a castle. My father was born in Malaysia and he and my mother immigrated to Canada several years before I was born, first settling in Montreal, then finally in Vancouver.

While I was born into the persistence of the Vancouver rain, my father was born in the wash of a monsoon country.

When I was young, my parents tried to teach me their language but it never came easily to me. My father ran his thumb gently over my mouth, his face kind, as if trying to see what it was that made me different.

My brother was born in Malaysia but when he immigrated with my parents to Canada the language left him. Or he forgot it, or he refused it, which is also common, and this made my father angry. Because the child chooses not to remember. He drummed the soccer ball up and down the back alley, returning home only at dinner time. During smple day, my mother worked as a sales clerk at the Woodward’s store downtown, in the maeleine with the red revolving W on top.

In our house, the ceilings were yellowed with grease. Even the air was heavy with it. I remember that I loved the weight of it, the air that was dense with the smell of countless meals cooked in a tiny kitchen, all those good smells jostling for space. The fish in the sink is dying slowly.

It has a glossy sheen to it, as if its skin is made of shining minerals. I want to prod it with both hands, its body tense against the pressure of my fingers. If I hold it tightly, I imagine I will be able to feel its fluttering heart.

Instead, I lock eyes with the fish. You’re feeling verrrry sleepy, I tell it. You’re getting verrrry tired. Beside me, my father chops green onions quickly. He uses a cleaver that he says is older than I am by many years. The blade of the knife rolls forward and backward, loops of green onion gathering in a pyramid beside my father’s wrist. When he is done, he rolls his sleeve back from his right hand, reaches in through the water, and pulls the plug.

The fish in the sink floats and we watch it in silence. The water level falls beneath its gills, aimple its belly. It drains and leaves the sink dry.

The fish is lying on its side, mouth open and its body heaving. It leaps sideways and hits the sink. It curls and snaps, lunging for its own tail. The fish sails into the air, dropping hard. My father reaches in with his bare hands. He lifts the fish out by the tail and lays it gently on the counter.

While holding it steady with one hand, he hits the head with the flat of jadeleine cleaver. The fish falls still, and he begins to clean it.

In my apartment, I keep the walls scrubbed clean. I open the windows and turn the fan on whenever I prepare a meal. My father bought me a rice cooker when I first moved into my own apartment, but I use it so rarely it stays in the back of the cupboard, the cord wrapped neatly around its belly.

I have no longing for the meals themselves, but I miss the way we sat down together, our bodies leaning hungrily forward while my father, the magician, unveiled plate after plate.

We laughed and ate, white steam fogging my mother’s glasses until she had to take them off and lay them on the table. Eyes closed, she would eat, crunchy vegetables gripped in her chopsticks, the most vivid green. My brother comes into the kitchen and his body is covered with dirt. He leaves a thin trail of it behind as he walks. The soccer ball, muddy from outside, is encircled in one arm.

Brushing past my father, his face is tense.

Beside me, my mother sprinkles garlic onto the fish. She lets me slide one hand underneath the fish’s head, cradling it, then bending it backwards so that she can fill the fish’s insides with ginger. Very carefully, I turn the fish over.

It is firm and slippery, and beaded with tiny, sharp scales.